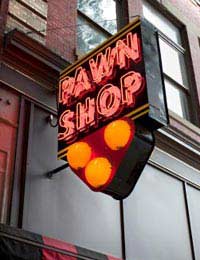 The UK has seen a significant rise in pawnshop broking. Previously seen as a last resort for borrowing and loans, pawnshops are now seen as a financially viable borrowing source.

The Rise in UK Pawnbrokers

Items That can be Pawned at a Pawnshop

Pawnshops will accept almost anything but in general items tend to be jewellery, watches and even antiques. Pawnbrokers will value the items before they decide how much can be borrowed against the item. Most pawnshops will accept electrical goods, musical instruments and basically anything that they think can be sold on if the item is not reclaimed. Customer should not expect the full retail price for their goods. The pawnbroker may have to sell on the item as a second hand good and the loan price will reflect this.

Where Can Pawnbrokers Be Found?

Pawnbrokers have been springing up in most high streets in towns and city centres. There are over 1300 pawnshops in the UK and this figure is continuing to rise. Pawnshops offer a range of financial services including cheque cashing facilities and payday advance loans. They will also sell goods on credit terms with interest fees and deposits required. Pawnbrokers can also be found on the internet and many offer free courier services to send goods though the post.

Pawnbrokers Should Be the Last Resort

Many borrowers would not dream of using the services of a pawnbroker. But with credit with reasonable interest rates becoming harder to find the pawnbroker has become an option. Pawnbrokers can be good borrowing solutions for short term loans when compared to loans options such as high interest payday advances. Borrowers with good credit records should have no reason to use pawnshops as interest rates will be much lower from traditional banks and online only lenders.

Customers are free to negotiate with pawnbrokers when selling goods if they think the pawnbroker’s offer is not reasonable. Customers do need to recognise that pawnbrokers will be giving evaluations on a second hand basis. This will be the amount of money that they consider they can sell the item for in the future. Many items sold by pawnbrokers are often sold at auctions and that can mean low sale prices. The pawnbroker will take these issues into consideration when valuing an item.

Pawnbrokers are simply another form of lending that has become popular in the UK. Many people would not consider using pawnbrokers due to the higher interest rates. But for people with poor credit records the pawnbroker may be one of the only borrowing options available. Customers using a pawnbroker should always read the terms and conditions of the credit agreement before signing.

How to Use a Loan Broker